This study aims to answer the problem of tourism development in the Cendrawasih Bay National Park through the formulation of alternative tourism development policies for the Wondama Bay Regency. To formulate an alternative policy, it uses two stages. The first stage uses logical argumentation method based on system thinking or system thinking which is expressed by the Causal Loop Diagram (CLD). In the second phase, a policy research is conducted which aims to propose alternative policies related to local tourism development, especially in the focus that has been chosen in the first phase. This study is qualitative, with data collection techniques used are through field observation, in-depth interviews with predetermined informants. Meanwhile, secondary data is obtained through literature study of sources that have relevance to the focus of the study. The results of the study show that from the two stages of this research, the management that has been more focused by the central government has not involved local communities and local governments. Management by the central government is the culmination of the iceberg phenomenon, where from the existing problem traced through the system thinking method which is explained in the CLD, it is known that the management by the central government has an impact on the level of involvement of the lesser community. Managing collaboration between stakeholders, budget allocation policies, increasing promotion and developing tourism destinations in Teluk Wondama Regency is a short-term solution to solve these problems. Furthermore, the intervention policy for  the  development  of  tourist  destinations in  Teluk  Wondama  Regency was analyzed in stage II. Based on aspects that affect tourism development policies that want to be achieved measured through the policy selection criteria that have been determined, then the alternative policy options offered are Development of Tourist Attraction to improve product quality and competitiveness in attracting the interest and loyalty of existing market segments because according to the needs of tourists for travel and  economic  needs  of  the  community,  this  alternative  policy  can  represent  both parties, here another, with the existence of new tourist objects in the land area, the local government of Teluk Wondama Regency can attract retribution from tourists to patch locally-generated revenue. 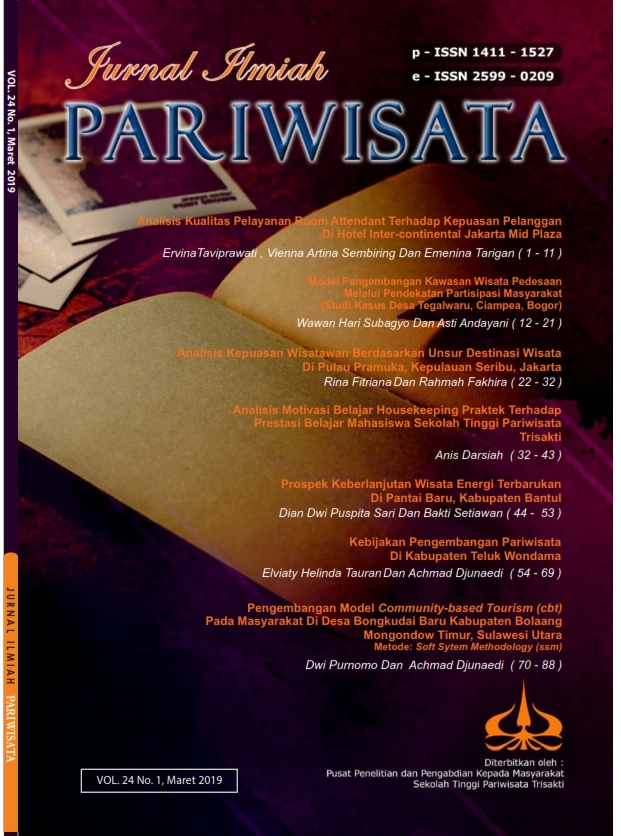